Hydrogen is a tasteless, colorless and odorless diatomic gas and the lightest and first listed element on the periodic table under the symbol H. It consists of only one electron and one proton. Hydrogen is the most abundant of the chemical elements, constituting roughly 75% of the universe’s elemental mass. Hydrogen can form compounds with most elements and is present in water and most organic compounds.  Fun fact: Over 90% of all the atoms in the universe are Hydrogen atoms. (1)

What’s the difference between H and H2?

H is atomic hydrogen and a free radical (an uncharged molecule). H2 is formed when two hydrogen atoms bond together and become a hydrogen molecule. H2 is also called Molecular Hydrogen or Dihydrogen. It is more stable than H with a neutral charge and is not a free radical.

H2 is the antioxidant in ‘hydrogen-rich’ water. It consists of two protons and two electrons and is known to be the smallest molecule in the universe. Due to its size it may go places where nothing else can, including your mitochondria, which power your cells with energy. (2)

A free radical is basically any atom or molecule having at least one unpaired electron. This means that free radicals are unstable and highly reactive with other molecules. Once formed these highly reactive radicals can start a chain reaction, like dominoes. Their chief danger comes from the damage they can do to other healthy cells when they react with important cellular components such as DNA, or the cell membrane. This cellular damage may then result in the development of a wide range of chronic symptoms, auto-immune and cognitive disorders as well as accelerated aging and it can also lead to serious illnesses and cancer. About 90% of the modern diseases are known to be associated with free radicals.

To prevent free radical damage the body has a defense system of antioxidants. Antioxidants are molecules present in cells that can donate an electron to a free radical without becoming destabilized itself.

A balance between free radicals and antioxidants is necessary for proper physiological function. If free radicals overwhelm the body’s ability to regulate them, a condition known as oxidative stress ensues. (3) 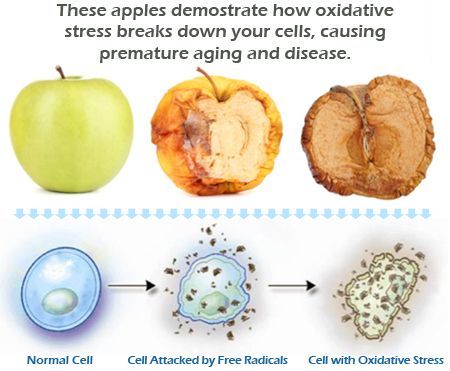 Oxidative stress is an imbalance between oxidants and anti-oxidants. It can lead to many pathophysiological conditions in the body. Some of these include neurodegenerative diseases such as Parkinson’s disease and Alzheimer’s disease, gene mutations and cancers, chronic fatigue syndrome, fragile X syndrome, heart and blood vessel
disorders, atherosclerosis, heart failure, heart attack and inflammatory diseases. (4) 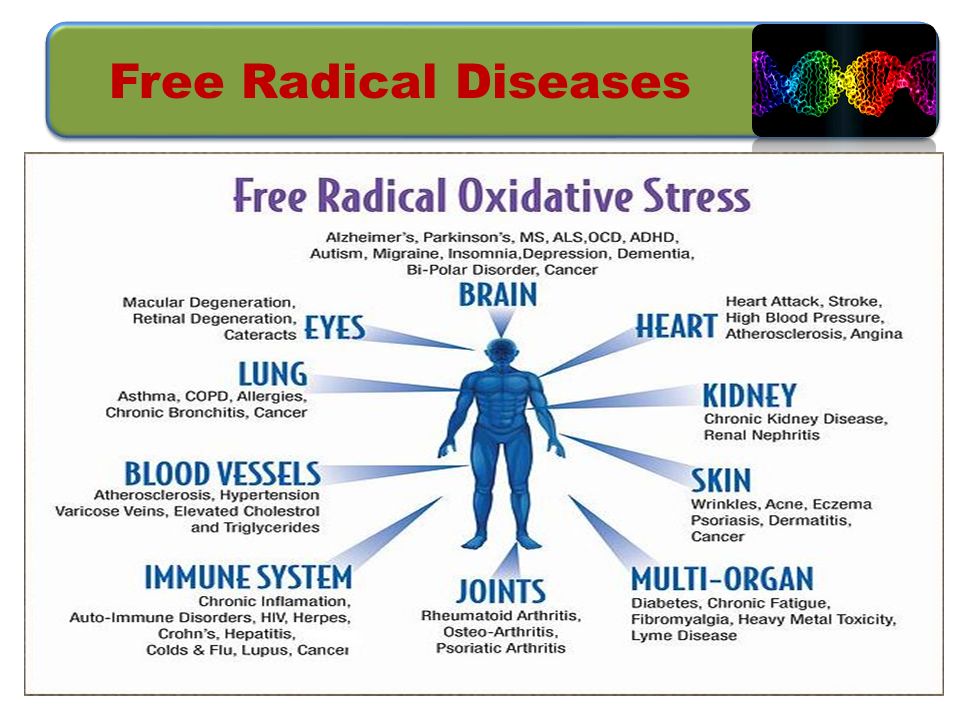 As the body ages, it loses its ability to fight the effects of free radicals. The result is more free radicals, more oxidative stress, and more damage to cells, which leads to degenerative processes, as well as “normal” aging.

Over time, researchers have narrowed the free radical theory of aging to focus on the mitochondrial health as an origin for many diseases and chronic disorders. Mitochondria are tiny organelles in cells that process nutrients to power the cell.

Research on rats suggests that free radicals produced in the mitochondria, damage the substances that the cell needs in order to work properly. This damage causes mutations that produce more free radicals, thus accelerating the process of damage to the cell.

This theory helps explain aging, since aging accelerates over time. The gradual, but increasingly rapid buildup of free radicals offers one explanation for why even healthy bodies age and deteriorate over time. (5)

Oxygen free radicals are highly reactive molecules that are formed as the result of breathing in oxygen. As the free radicals interact with other molecules in the body, they cause oxidative damage on cell membranes and genes in the cells that can result in the development of a wide range of illnesses and diseases such as aging and cancer. About 90% of the modern diseases are known to be associated with free radicals.​

An important factor is the safety of hydrogen and that no adverse effects of hydrogen have been described. This is also very relevant, since many drugs are limited in their use because of toxicity, adverse reactions, and unfavorable dose-response characteristics. Hydrogen does not have these problems.

​Because Hydrogen is the smallest and lightest element in the periodic table. When ingested, it travels throughout the bloodstream and finds its way into the mitochondria, the energy centers of a cell, and penetrates the nucleus, where the majority of DNA is stored. Once there, it significantly reduces free radicals—inflammation-causing molecules linked to everything from accelerated skin aging to cancer. This is no small thing: A 2010 study from the Journal of Clinical Biochemistry and Nutrition showed that when 20 overweight or obese subjects with symptoms of metabolic syndrome (high blood pressure, insulin resistance) drank 1.5 to 2 liters a day of hydrogen water for eight weeks with no other dietary changes, they saw a 39 percent increase in an enzyme that fortifies the body against free radicals; a 43 percent drop in thiobarbituric acid, a substance linked to oxidative damage; and a 13 percent decrease in total cholesterol—results comparable to those of cholesterol-controlling medications.

Molecular hydrogen is particularly effective because, unlike other antioxidants, not only is it teeny-tiny, it’s also unusually selective about the free radicals it tackles. One of its main functions is shutting down hydroxyl, or OH (one molecule of oxygen, one of hydrogen), which is perhaps the most reactive free radical in the human body and which our cells emit as a result of trauma and oxidative stress, as well as (in small amounts) after every single thing we do—from breathing to dancing all night.​

Like all free radicals, hydroxyl has an unpaired electron, and that electron turns it into an insatiable whirling dervish that can’t be calmed until it stabilizes itself.  It will steal an electron from DNA, cell walls, the mitochondria—and it will damage those when it does.

A 2014 study from the scientific journal PLOS One examining traumatic brain injury (TBI)—which cues an uptick in hydroxyl radicals and inflammation, and which research shows may trigger Alzheimer’s and Parkinson’s—found that when mice drank hydrogen after sustaining a TBI, swelling of the brain was reduced by about half.

But hydrogen water cuts it off at the pass, splitting into its two hydrogen atoms, each of which donates its single electron to a hungry hydroxyl radical—triggering a chemical reaction that seems more mystical than scientific. Whereas some antioxidants, such as beta-carotene (found in carrots), can become free radicals themselves after donating their electron to stop a free radical, hydrogen bonds with hydroxyl’s hydrogen and oxygen to form a whole new molecule that’s the opposite of harmful: H2O.

Speaking of H2O, a study was performed to compare the effects of drinking tap water, spring water and hydrogen water. The consumption of tap water after three hours increased oxygen free radicals unstably, while the consumption of hydrogen water reduced oxygen free radicals in only five minutes.  Anyone drinking Hydrogen water will feel better almost immediately, with more alertness and feeling energetically refreshed as if they had the best nights sleep.